Topic Progress:
← Back to Lesson

Turtles can be hosts of the following bacterial pathogens:

Due to the zoonotic potential, it is important to wear adequate PPE such as gloves, when attending a sea turtle rescue. Before and after each sea turtle is it important to thoroughly wash your hands and disinfect any rescue equipment used.

The most common parasites found in sea turtles range from:

Please follow the same precautionary steps as mentioned above in the Bacteria section in regards to PPE, personal hygiene and equipment disinfection.

Reported sea turtles are often found in an immunocompromised state and you can expect to find weak individuals with a high epibiotic load. Epibiotic load refers to organisms that live on the surface of another animal,  however they are not classed as parasitic (epibiota are not harmful). This can suggest that the sea turtle is suffering a complication that may be due to a natural pathogen or, in some cases, human impact.

Injured or sick sea turtles will often present with a range of external organisms such as barnacles or algae and an overabundance of these can be indicative of adverse health or environmental conditions. In many cases, the epibiotic load on a sea turtle can be eased with freshwater bathing, a technique that is readily used by rehabilitation facilities when a turtle is admitted. Organisms that typically thrive in saltwater environments will naturally be eliminated through this simple process. 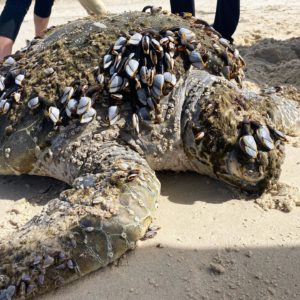 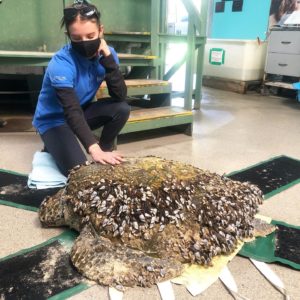 Fibropapillomatosis is a disease in sea turtles that is particularly prevalent in green sea turtles. The disease has been linked to a herpes virus and generally results in benign (non-cancerous), cutaneous (affecting the skin) tumours that can be present anywhere on the turtle including the limbs, neck, head, cornea and tail. Tumours may also present internally and cause internal damage.

This disease can impact the regular functions and normal behaviour of a sea turtle, including:

In severe cases, fibropapillomatosis can result in death if the sea turtle’s condition severely deteriorates or if their natural behaviours are impaired. 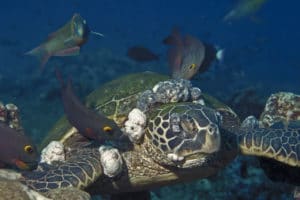 Although at this stage there is no confirmation regarding disease transmission routes, it is believed that fibropapillomatosis is associated with poor environmental conditions. Higher-than-normal water temperatures, pollution and associated biological factors are believed to impact the immune system of the turtles in these areas which may make them more susceptible to contracting the disease from infected individuals or substrates. Due to the impact of environmental factors, the disease appears to be most prevalent in near coastal populations.

If you suspect fibropapillomatosis, you must thoroughly disinfect all equipment and materials used during the rescue process. It is recommended to use strong disinfectants such as F10 and allow the disinfectant to soak for 20-30 minutes. This should be rinsed off thoroughly with freshwater afterwards.

Gloves must be worn at all times when rescuing a suspected fibropapillomatosis sea turtle and when disinfecting equipment. Please dispose of the gloves appropriately to avoid the spread of disease.

The current reliance on non-degradable convenience items has unfortunately lead to a high volume of discarded marine debris (particularly plastics) in our oceans.

Rubbish such as plastics and discarded fishing equipment can be unintentionally ingested by sea turtles and may cause temporary or long-term health complications. In some cases, plastic ingestion can prevent a sea turtle from being able to exhibit a range of natural behaviours such as foraging, diving and swimming.

Entanglement can affect sea turtles of all ages, from hatchlings to adults. Entangled sea turtles may lose their ability to forage, dive and swim and this often results in a loss in body condition or death if a sea turtle is unable to surface to breathe. Sea turtles can suffer severe injuries due to entanglement and may require amputation due to the severity of the wounds in some cases.

Ingestion of marine debris such as rope, plastic bags and microplastics can cause internal wounds, buoyancy issues, feeding difficulties. In some cases, the ingested debris cannot be passed by the turtle, causing blockages in the digestive tract. 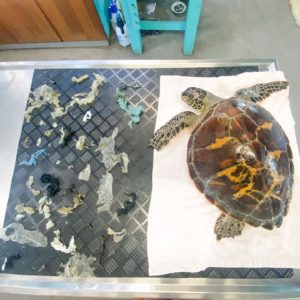 A sea turtle exhibiting the following behaviours confidently and freely is considered to be a normal and healthy individual:

A sea turtle with the following appearance and/or behaviours would be considered abnormal and unhealthy individual:

Floating can be an indication of infection (creating a gas pocket) and can be hosts to parasites or bacteria. 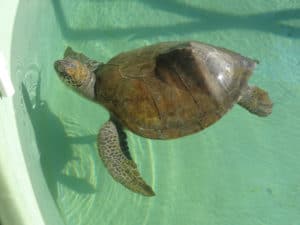