Marine turtles have lived in the oceans for over 100 million years. They are an integral part of the traditional culture of many coastal indigenous peoples throughout the world.

Marine turtles migrate long distances between their feeding grounds and nesting sites. They have a large shell called a carapace, four strong, paddle-like flippers and like all reptiles, lungs for breathing air. The characteristic beak-like mouth is used to shear or crush food.

All marine turtle species are experiencing serious threats to their survival. The main threats are pollution and changes to important turtle habitats, especially coral reefs, seagrass beds, mangrove forests and nesting beaches. Other threats include accidental drowning in fishing gear, over-harvesting of turtles and eggs, and predation of eggs and hatchlings by foxes, feral pigs, dogs and goannas.

Of the seven species of marine turtles in the world, six occur in Australian waters:

The only species that does not live in Australia is the Kemps Ridley turtle.

Other interesting facts about sea turtles;

Leatherbacks and hawksbill turtles feed on jellyfish and keep their populations in check. Plastic looks like jellyfish when it’s floating in the water and that’s why so many turtles die from ingesting plastic—they were going for a tasty snack.

Green sea turtles have a more plant-based diet and eat seagrass. By keeping seagrass short, they prevent it from getting tall and harming other marine creatures.

Since they don’t have to protect themselves from predators for most of their life on water, sea turtles cannot retract their flippers and head into their shells. Their anatomy makes them more agile when under the sea but highly vulnerable when nesting and hatching.

Warmer nests lead to more females and cooler ones lead to more males—which is why climate change could drastically affect their populations by creating too many females and too few males to match them for reproduction.

An estimated 110 million years is how long sea turtles have existed on Earth, which means they once shared the planet with T-Rex and other dinosaurs.

To accomplish this mighty feat they slow their heart rate to up to nine minutes in between heart beats in order to conserve oxygen. 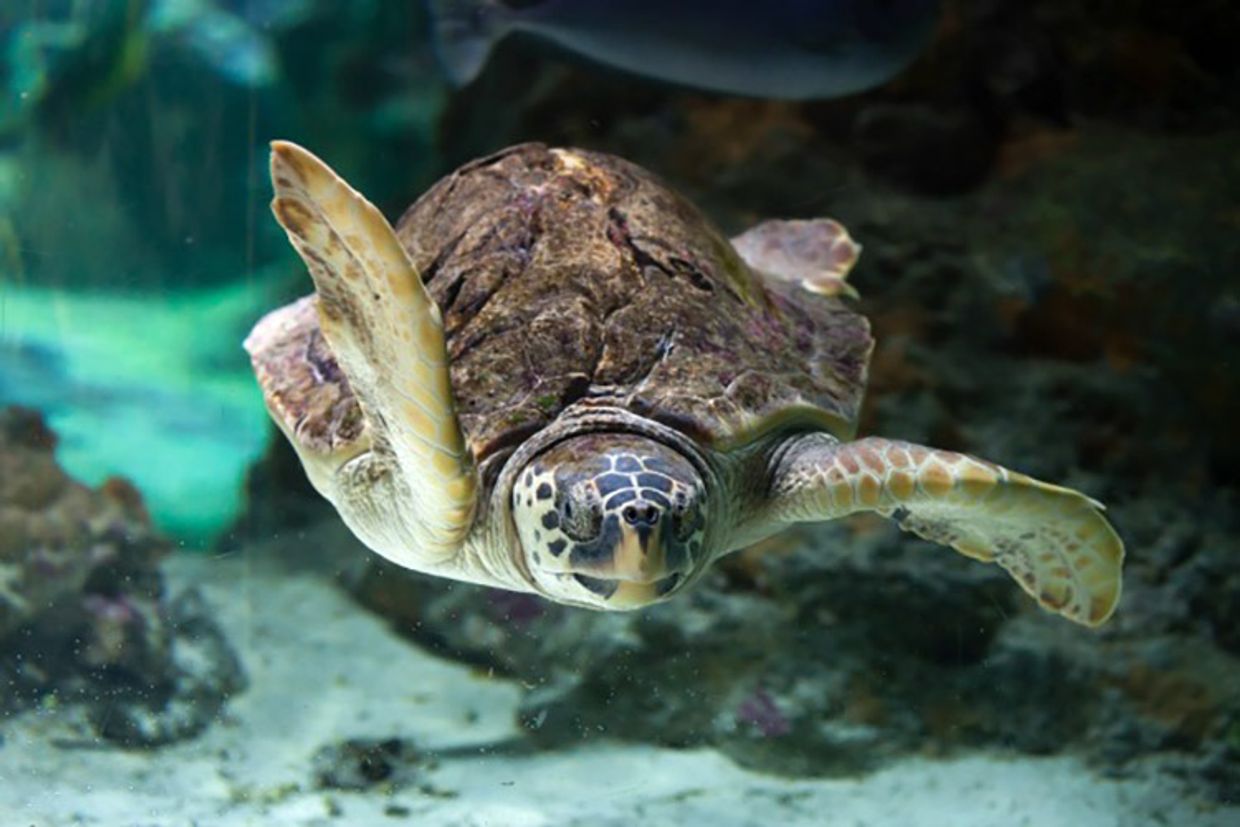 Even though they’re marine animals, some of their natural predators include dogs who dig up their eggs buried in the sand.

Sea turtles can detect the Earth’s magnetic field and they use it as a compass.

The  topics will cover;

Carapace is the hard upper shell of a sea turtle.
Cold-stunned is a condition suffered by sea turtles when they are in water of less than 10° Celsius which lowers their heart rate, circulation and as a result they become very lethargic.
Curved carapace length (CCL) is the measurement from the front of the carapace (where the carapace and skin meet) down the midline of the carapace to the back edge of the carapace (over the tail) The tape measure follows the curve of the carapace.
Curved carapace width (CCW) is the measurement across the carapace taken at the widest point. The tape measure follows the curve of the carapace.
Elements database is the incident database system used by NSW National Parks and Wildlife Service (NPWS) staff and approved licensed wildlife rehabilitation providers to report marine wildlife events.
Epibiota is an accumulation of organisms living on the surface of another living organism. Barnacles, molluscs, polychaetes, amphipods and algae may be found on marine reptiles. They are not parasites.
Experienced marine reptile rehabilitator means someone who has extensive knowledge of current rehabilitation techniques gained through training courses and many years of successfully rehabilitating and releasing sea turtles and sea snakes. Marine reptiles are sea turtles and sea snakes.
Park means a national park, historic site, state conservation area, regional park, nature reserve, karst conservation reserve or Aboriginal area, or any land acquired by the Minister under the NSW National Parks and Wildlife Act 1974.
Marine park is defined as an area declared and managed under the Marine Estate Management Act 2014.
Plastron is the underside of a sea turtle’s shell.
Protected animal means any amphibian, reptile, bird or mammal (except dingos) listed or referred to in Schedule 5 of the BC Act that is native to Australia or that periodically or occasionally migrates to Australia (including their eggs and young).
Straight carapace length (SCL) is measured from midline point at the front of the carapace to the notch at the midline point at the back of the carapace. It is usually measured with callipers.
Recovery, when referring to an individual, means a return to a functional condition after aninjury or illness. This includes the natural ability of an animal to feed, interact, move, and evade risks and hazards in a wild situation.
Wildlife rehabilitator means someone who is either authorised by a wildlife rehabilitation provider or zoological park or is individually licensed by the Department to rehabilitate and release protected animals.
Wildlife rehabilitation means the temporary care of an injured, sick or orphaned protected animal with the aim of successfully releasing it back into its natural habitat.
Wildlife rehabilitation provider means an incorporated wildlife rehabilitation group or individually licensed wildlife rehabilitator that is licensed by the Department under the BC Act to rehabilitate and release protected animals.
Zoonoses are diseases that can be transmitted from animals to humans.